Born to Be Wild: The Rise of the American Motorcyclist 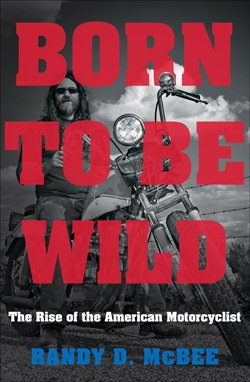 At 3:00 on a Wednesday afternoon, October 26, 1881, in Tombstone, Arizona there was a gunfight involving the Clantons, the Earps, and Doc Holliday. The fight – which took place in under 30 seconds according to contemporary reports – has been used to tell a variety of stories: the coming of law to the West, the imposition of bourgeois or “East Coast” values on the frontier, the death pangs of the Civil War. The gun fight was a symbolic moment, an event that immediately captured the essence of something that was seen – even at the time – as transcending its particulars.

Pretty much all day – and all night as well, if at least some of the stories are true – on July 4th, 1947 a group of motorcyclists ran wild through the small California town of Hollister. Like O.K. Corral, a very localized and fairly inconsequential event captured the imagination of a great many people. Like the gunfight at the O.K. Corral, Hollister was seen as symbolizing a great change of some kind – a generational change, perhaps, or the loss of traditional values, the beginning of the post-war period, or the birth of suburban America and the reaction against it. In the history of motorcycles and certainly in the history of “bikers” in the United States, July 4th, 1947 is the great divide.

Both Hollister and the O.K. Corral are mythical events in that the meaning imposed on them far outweighs the importance of factual accuracy. Historian Randy McBee explores the cultural image of the “biker” and uses Hollister as the point at which motorcycles become something more than transportation, the point at which they begin to get cemented into the American imagination as symbols of freedom, rebellion, youth, lawlessness, and danger.

Why the events in Hollister – and which are often indistinguishable from those in the subsequent film, The Wild Ones – are perceived as a disruptive moment in history requires an understanding of the time in which it occurred. If Hollister helped define an era, the era equally raised a rough, but not completely atypical, weekend in a small farm town to symbolic national importance. What McBee does – and does very well – is provide the context for the development of the idea of a “biker.”

What most stands out for me is McBee’s range of historical sources. It seems to me that he must have somehow found every single reference to anything motorcycle-related between the 1930s and 1980s. McBee draws not only on articles in newspapers and popular magazines, but on letters to the editors that appear in both, allowing us a look at both the dominant view as well as the reactions to it by motorcyclists and the general public. This is a tremendously rich book.

It is also a very well-written book. McBee writes in a smooth, clear style that is a pleasure to read. Born to be Wild never sinks into dry academic formality but instead provides a rounded and lively view of the mid-twentieth century as seen by those who lived it. It is also a nicely organized book – McBee shapes the tremendous amount of source material into a coherent narrative.

If there is one weakness to this book, it lies in the fact that where context ends is largely a judgement call; how much do we need to know? I think sometimes McBee wanders. The introduction of Honda motorcycles into the United States is of huge importance in this story, but the life of Mr. Honda is not. Similarly, one of the most interesting sections to me is the way motorcycling was racialized during the Civil Rights era. This is a wonderful section of the book and could – and perhaps should – be published as a stand-alone article. Unfortunately, this chapter also goes on at some length about motorcycle police during the same time period and it seems to me to be quite a stretch to bring in motorcycles here; everything McBee writes about the “motorcycle police” could simply be written about the “police.”

But this is perhaps quibbling. I think Randy McBee’s Born to be Wild will be the standard on the history of 20th century motorcycle culture. I do not think it possible for other scholars to delve into this time period without considering this book. It is an important work.

John Sumser I have a B.A. and M.A. in philosophy and an M.A. and Ph.D. in sociology and I focus on mass media and popular culture. I am a veteran, a returned Peace Corps volunteer, and a recipient of a Fulbright Award to the Czech Republic. I have published three academic books and written – but not published – four novels. I have hitchhiked across the United States and Europe, been briefly kidnapped in Nebraska, deported from Scandinavia, and detained as a spy in Afghanistan. I have ridden hundreds of thousands of miles and currently own two motorcycles: a Triumph Thruxton 900 and a Ducati Multistrada 821, I am a professor in the Department of Communication Studies at California State University, Stanislaus. I have two apparently stable and happy children and an old, but very smart dog.