‘Ixion’ of The Motor Cycle. The Fiery Wheel. (The First Motor Cycle Dairist). The Life and Times of Canon Basil H. Davies B.A. 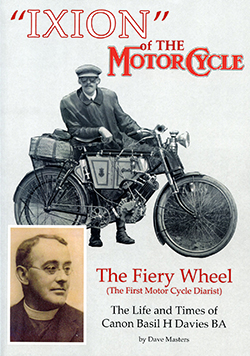 For almost six decades, an Anglican priest provided inspiration and advice to generations of British and colonial motorcyclists. In his weekly articles, Ixion’s “Occasional Comments,” appearing in The Motor Cycle (one of the foremost motorcycling periodicals), he provided an insight into the movement; his rather secretive persona belying an in-depth knowledge gained by dealings at grass-roots levels with those involved in the industry and through being involved in the sport since it began in the previous century.

Dave Masters, the author of this much-needed biography, is a rider of vintage machines and an organiser of the now annual, Ixion Cavalcade which takes place in Bexhill-on-Sea, on the south coast of England. The event is run in co-operation with the Sunbeam MCC and the Vintage MCC. The biography begins with a section on Basil Henry Davies, Ixion’s true identity and a family reunion at Bexhill, where he held a clerical post. The reunion, in 2011, centred around his son Godfrey, then himself approaching his century, drew almost 40 family members from around the world as well as a sizeable number of vintage and veteran machines, to take part in a commemorative run. Up until this, it was felt that Ixion was doomed to fade into the mists of history, being recognised for his achievements by a relatively small clique of riders interested in old motorcycles or historians of this persuasion. Fortunately, this event now seems destined to become a fixture in the classic motorcyclist’s calendar.

In the first chapter, the author makes an in-depth study of Davies’ primary and most important concern, his family life. The writer emphasises correctly, the importance of the use of primary sources in compiling history, here exemplified in his use of family reminiscences. In doing so, Masters allows the reader the opportunity to discover the roots of Ixion’s character as well as explore some aspects of turn of the twentieth century “Englishness,” (set in quotation marks as Ixion’s wife was American). His inclusion of some diary extracts from Ixion’s wife adds a particular piquancy. The chapter continues in a similar vein, giving brief resumes of the lives of Ixion’s children.

The second chapter begins by posing the question, “why a motorcycling priest?” Here, the writer uses the valuable resource of Ixion’s “Reminiscences” allowing the hero to answer for himself.[1] Apparently, Ixion was bored with his humdrum life acting out a minor role in a prep school. Although he had gained limited experience of powered transport via some “rich and foolish friends,” his finances did not stretch to ownership. A small inheritance changed this. The next few pages of the chapter showed how Basil learned how to handle both machine and tradesman, both of which needed care. Basil involvement in journalism stemmed from his need to finance his sport; his gradual acceptance as a pundit being revealed in his regular contributions to The Motor Cycle. How the man’s tastes had changed and mellowed through the decades is shown in a selection of his articles. Ixion, and therefore Basil, loved Scotts in particular. Towards the end of his life he favoured the humble Velocette LE as a machine for everyman, (which is sometimes referred to as a noddy bike in Britain, it having been used by police forces). The chapter ends with a review of involvement with the motorcar, which was bourn of necessity due to his ill health. (It is believed by the writer of this review that this is one of the few valid reasons for owning or driving one.)

Chapter three begins with a further exploration of Basil’s character, starting with some speculation regarding his relatively poor degree results, considering his future achievements. Following on, his sporting activities are reviewed including a pioneer End to End motorcycle ride, from John o’ Groats to Land’s End, and regular organising of trials and reliability runs, the means by which sportsmen could prove themselves and manufacturers improve the breed. Notable amongst the inclusions and showing how Basil had gained the respect of the manufacturers, through his journal articles is the challenge set by Triumph to him, to test one of their machines over a period of 6 days and 1200 miles. Masters includes these episodes as a means of developing a wider view of the man as sportsman, who incidentally also had interests as diverse as cricket and bridge.

The longest chapter, number four, is devoted to what made Basil an important part of the motorcycling sub-culture. His “Occasional Comments” in The Motor Cycle are analysed by Masters in an attempt to show the ways in which Ixion’s prose style had changed, if any, over the decades. This affords the reader plenty of scope to scrutinise and savour a selection of his articles re-printed within the work, without recourse to the originals, now found today mainly in archives such as the Vintage Motor Cycle Club at Burton upon Trent or luckily if seldom at what the British call autojumbles and Americans refer to as swapmeets. Ixion’s writings quite naturally vary in style, from its commencement in a very definite Victorian prose to its final incarnation as the work of an informed modern writer backed by decades of experience.

A few pages give, in colour, tantalising glimpses of some contemporary publications, most of which were written by Davies, usually under a pseudonym. One notable aspect of Ixion’s articles is the steady encroachment felt by him of foreign machines into Britain’s domination of the market, via the racetrack.

Speaking of one of his favourite mounts, the Scott in 1930, Ixion’s prose is a delight to read, “…the Scott Spirit Special. This is the blood mare of the Scott stable.” (This is another allusion to horse riding explored in the present writer’s PhD thesis.)[2] “… and a whole delicious machine for the knowledgeable rider who likes speed.”[3]

Chapter five is devoted to Basil in his clerical role as an itinerant Anglican vicar. Before settling upon Bexhill-on-Sea, where this story begins, Basil travelled wherever he was needed. Here, Masters engaged in some deal of detective work, aided no doubt by Crockford’s clerical directory, a useful tome for such research, in locating and describing Basil’s incumbencies, whilst also attempting to show how he developed his pastoral skills.[4] Masters has evidently visited the majority of the churches in which Basil was involved, (hopefully sometimes by riding a Velocette of his long-time acquaintance). He draws on these visits when describing them, whilst also resorting to Pevsner.[5] The remains of the chapter, claims Masters, are taken from the work of a Nichola Gowing, who wrote on St. Barnabas, Bexhill in a quite detailed section of Basil’s time there.[6]

Chapter six commences with an explanation of Basil’s most famous pseudonym, the rather convoluted Greek legend of Ixion. A few rather enlightening paragraphs follow which will entertain readers of old bike magazines who wish to know the real names of similarly disguised authors. Aside from his regular articles in The Motor Cycle, Basil was involved in a variety of other publications, most often concerning the running and maintenance of motorcycles, but also, as has been mentioned, on cricket and contract bridge. Masters here attempts to show Basil’s versatility as an author as well as hinting at writing being used as a means of putting bread on the table. Basil’s breadth of journalistic output also included radio broadcasts. This, claims Masters, was a medium that allowed him to maintain the degree of anonymity which seemed important to him.

In the final chapter, the author concerns himself with Basil’s personal life, the subject’s character, and feelings towards his family and their problems. Surprisingly, Basil and his wife drifted apart and led separate lives for the latter part of them, which seems unusual for the clergy. As Basil’s life became more restricted due to ill health, his “Occasional Comments” became more important as a safety valve to him. Masters has again evidently donned his detective clothes and set off on another exploratory adventure in search of Basil’s habitations during his final years, where he resided in a number of rather well-to-do homes whilst leading a seemingly solitary existence. The final part of the chapter consists of obituaries by the then famous names of motorcycling journalism, ending with a footnote on why Masters undertook the project.

This book, softbound and privately published by the author, with the sponsorship and donation of many illustrations within by the Mortons Media Group, who publish many classic vehicle journals, fills a long existing void in motorcycling history. It can be compared in importance to the recent biography of Titch Allen, founder of the VMCC.[7] Masters has, despite a not surprising lack of easy-to-hand data on the reclusive subject, succeeded in producing a readable and enjoyable book, which gives a flavour of motorcycling in the long-lost golden age. The only fault I can find with it, apart from it not yet being part of the reading list for transport historians, is that its reproduced “Comments” and some other pictures have rather small print, have been photocopied from the originals and sometimes not completely. A small fault, but a great effort!

Christopher Thomas Potter holds a PhD from the University of Northumbria for work including a thesis on social and cultural aspects of motorcycling during the interwar period. He has owned and ridden motorcyclists for over the the last 30 years, never having owned a car. Currently, he spends a good deal of time helping restore steam engines at Locomotion museum in Shildon, one of the cradles of the railways. He is the secretary of Durham and District MCC, a local rally club and his two favourite machines are a ‘78 Triumph T140V which he has ridden since 1984 and a 1990 BMW R80RT, both of which have over 120 thousand miles on them – “I don’t think you really get to know a motorcycle until you’ve owned it a decade or two!”