In 2000, a PhD candidate in Borderland studies at the University of Texas at El Paso had an idea. Gary Kieffner created the Motorcycling Myth and Culture area for the regional Southwest/Texas branch of the American Culture/Popular Culture conference and posted a call for papers for their 2001 meeting in Albuquerque, New Mexico. A handful of motorcycling scholars scattered at institutions across the nation, including Steven, thought to themselves, “My university will buy me a plane ticket to fly halfway across the United States to talk about motorcycles? I’m in!”

As would become Gary’s yearly practice, he invited non-academic members of the motorcycling community to attend as well. This commitment to inclusivity derived from the theoretical principles guiding his dissertation on women’s motorcycling in the borderlands. He contended that bikers are conceived as Other, and, like the indigenous and the formerly enslaved, share an identity constructed for them without their consent. Research on motorcyclists risked perpetuating his colonializing mindset by treating the object of study as Other. One way to evade this trap was to allow the marginalized subject, in this case motorcyclists, a voice.

The initial gathering brought academics and non-academic motorcycle enthusiasts together. It attracted scholars from across the U.S. but also from around the world, including Katherine Sutherland and Ted Bishop from Canada, Primož Jurman from Slovenia, Ivan Rabinowitz from South Africa, and Suzanne McDonald-Walker from the UK. Advocates of motorcycle rights formed part of the audience, chaired panels and gave presentations.

Gary was equally committed to making the conference experience as much like a motorcycle rally as possible: at day’s end, we’d gather for beers at a local establishment or do a poker run (by foot) from bar to bar.

The following year’s conference drew more participants, the next still more. Gary, Steven and motorcycle journalist Susan Buck decided to edit a collection of scholarly articles from conference attendees and others working in the emerging interdisciplinary area of motorcycle studies. They went to work on Two Wheels to Freedom: Discovering Motorcycle Culture, as the momentum grew.

By 2003, owing to its prominence at the SW/TX regional meeting, the Motorcycling Myth and Culture area became a part of the national meeting of the PCA/ACA as well. As its popularity increased, Gary needed help and asked Suzanne to assist him in organizing the panels.

At the first national meeting, journalist and screenwriter Wendy Moon proposed the idea of creating a journal that would enable motorcyclists worldwide to connect with one another and share their research, photographs and reviews. The International Journal of Motorcycle Studies (IJMS) would be online, to speed the unwieldy process of academic publication, but still peer reviewed. And publication online would make it accessible globally, with no subscription fees barring access. Wendy and Suzanne agreed to serve together as managing editors, guided by an international board of advisors. On the spot, they conscripted Gary and Steven (USA), Ted Bishop and Katherine Sutherland (Canada) and Tim Holmes and Geoff Crowther (UK). Randy McBee would serve as Reviews Editor. Alice Sexton, then President of US chapter of the Women’s International Motorcycle Association (WIMA), volunteered to be the site’s graphic designer. Steven and Suzanne secured space on Nova Southeastern University’s servers and asked if their colleague, Greg Horne, a committed BMW rider who headed the IT department, would pitch in as web master. The inaugural issue appeared in March 2005. By April, it had attracted the attention of The Chronicle of Higher Education, who published an article titled “Getting Serious about Cycles,” announcing “a new publication on motorcycle studies has hit the information highway.” 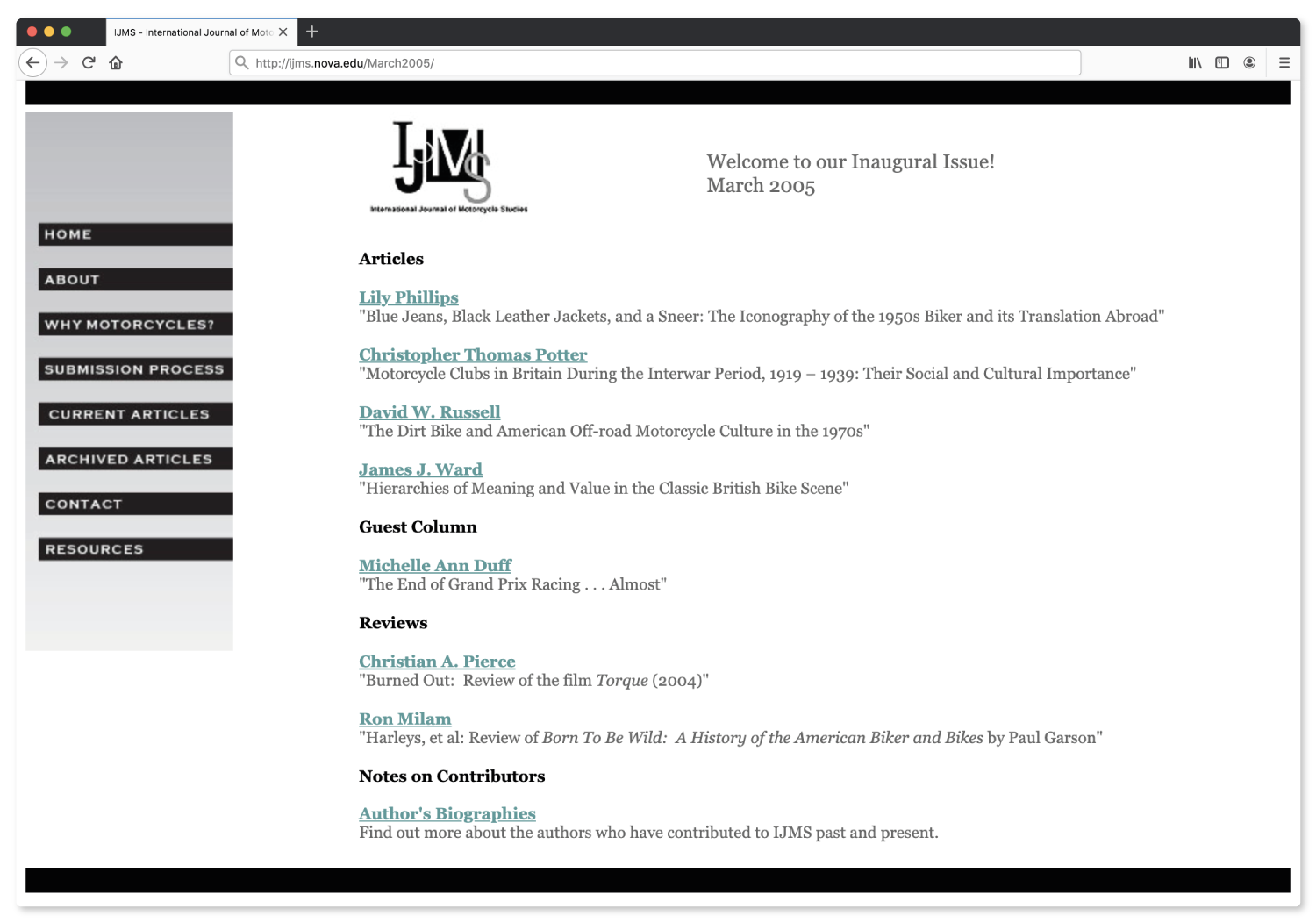 At about the same time, Gary, Susan and Steven, whose book had been accepted for publication by the University of Wisconsin Press and should have appeared in 2005, learned that the press was ceasing operation, cancelling over 40 signed book contracts in the process. The news reached them simultaneously with the submission of the final manuscript. Their loss, however, was IJMS’s gain, as many of the essays that would have appeared in their book were published in the journal. In their introduction, they had written, “there is no such thing as a ‘real’ biker … We hope not to define the biker, but to peel away layers of misinformation and prejudice so that a discussion can begin as to the many meanings of motorcycles and motorcycle culture.” Their purpose resonates in the journal and in our conferences to this day.

The first few years of publication were marked by growth and adjustment. Ambitious plans for 4 issues a year were scaled back. Christian Pierce assumed the position of Reviews editor. Alice and Greg passed on responsibility for web design to the managing editors. Wendy bowed out and Suzanne worked with Randy as her co-managing editor for a time before Steven stepped in. We experimented with including photographic essays, creating roundtable discussions of key texts or topics, and special issues, including one devoted to teaching motorcycle studies.

By 2009, the conference was attracting ever more participants and the journal more attention, so much so that Katherine Sutherland suggested we consider holding our own conference that would focus solely on motorcycle studies. (She might have been inspired by the conference’s New Orleans venue and our field trip to motorcycle designer J.T. Nesbit’s Bienville studio.)

In a sense, the journal had already made the leap by sponsoring a conference in 2007, organized by Geoff Crowther on the Isle of Man in conjunction with the centenary of the TT. “The Isle of Man TT Races: Heritage, Place and Spirit” took place during practice week and drew participants from Japan, New Zealand, Greece, the USA and Canada, as well as the Isle of Man and England. The Greek owners of the Matchless trademark undertook an Odyssean voyage from their base in Greece to transport two historic motorcycles to exhibit at the conference. Dave Roper, the only American racer to have won a race at the TT, attended the conference and posed for a photo on one of the vintage bikes. Former British TT racer Nick Jeffries took us on a turn-by-turn tour of the course (by bus), and we spent each evening watching racers speed by during practice.

What Katherine proposed was a hybrid of our historic practice: an annual meeting alternating between a location in North America one year followed by one in a glamorous international destination the next. Alex Ilyasova offered her institution in Colorado Springs as the first to host us in 2010, and Lisa Garber volunteered to organize submissions. Following Gary’s lead, Alex reached out to the local motorcycle community in Colorado Springs, inviting them to attend. She organized dinners at brew pubs and a group ride into the surrounding mountains. In 2012, 2014 and 2017, Alex again welcomed us to the University of Colorado, Colorado Springs, creating new opportunities each time. The famous Boulder-based motorcycle photographer Michael Lichter displayed his work one year; director Miguel Grunstein premiered his heady short film, Absolutely Nothing, Next 22 Miles . . . A Fugue for Motorcycle another. Sheila Malone curated a festival of short motorcycle films, a practice that continues to this day.

IJMS finally realized its goal of meeting at a glamorous international destination in 2013, thanks to Caryn Simonson, who organized a conference in swinging London at Chelsea College of Art and Design. Working with local artists, Caryn curated a fascinating exhibition of motorcycle photography, art, and memorabilia as part of the event, complete with entertainment from local band Country Dirt. Motorcyclists in the community filed in, parking their bikes on the college’s historic promenade. The conference took off in style with a keynote address from everyone’s favorite female world traveler, Lois Pryce, and on the final day attendees boarded a classic double-decker British bus for a trip to the hallowed Ace Café. Tim Fransen, who created the conference website, was so successful that we enlisted him to design a new logo and website for the journal. He has been our webmaster ever since. Caryn was kind enough to host again in 2016.

IJMS’s new site went live in 2015 at the conference organized by Christian at the Barber Museum in Birmingham, Alabama. Not only did participants get a guided tour of its extensive collection, they gained access to its restoration area and research library. Christian also arranged a tour of Motus Motorcycles’ headquarters, with stops for barbecue and beverages, of course.

After 10 years of editing the journal, Steven and Suzanne decided it was time to step aside and passed the reins to Christian, with Sheila Malone’s support. A demanding fulltime job, combined with work on his PhD, meant that Christian had to reluctantly scale back his involvement. Happily, Sheila was willing to take over, with the help of John Sumser as submissions editor. Under her direction, the journal freed itself from the analog legacy of single-issue publication and now publishes articles and reviews as soon as they have successfully navigated the peer review process. She hosted us at her institution, Chaffey College in Rancho Cucamonga, California in 2018, and, like Caryn before her, collaborated on a companion exhibition with the Wignall Museum of Contemporary Art. Physicist and filmmaker James Butler, making his first appearance at an IJMS conference, claimed 2019 for his institution, Pacific University, in Forest Grove, Oregon. He retained the practice of incorporating presentations from members of the local motorcycle community but introduced an innovation of his own: the Weird Motorcycle Power Half Hour, which introduced attendees to his friend, the writer Charles Austin Muir, and Mini Evel, the star of the short film they created, “The Unbearable Lightness of Crashing.” Their film was later selected for the Portland Motorcycle Film festival where it was honored as the shortest short film ever shown in competition.

This year—2020—would have been a celebration of three IJMS milestones: 15 years of the journal’s publication, 10 years of gathering at IJMS conferences, and 5 years of conferences in Colorado Springs, where Alex was ready and eager to host us again. Marina Cianferoni was planning to invite us to Spain in 2021. But then a global pandemic changed everything.

We hope to have a belated celebration in Colorado Springs in 2021 and travel to Spain in 2022, but … we’ll see. For now, we are turning to the technology that made the journal possible to gather with you and share our memories and history virtually. Let’s imagine ourselves on a ride through the mountains followed by a poker run on foot ending at a downtown brew pub where we can raise our glasses to everyone who has presented a paper, published an article, reviewed a submission, organized a conference, edited an article or an issue, created a film, mounted an exhibition or contributed work to it. We’d end by thanking Sheila for leading us, Lisa for gathering our submissions, and Tim for hosting us in our virtual space.

Without ALL of you, there would have been no journal, no conferences, and, above all, no joy in gathering together out of our shared passion for motorcycling. Here’s to you!