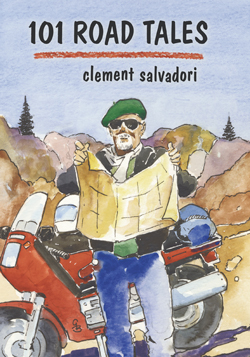 Since 1988, Clement Salvadori has written “Road Tales”, a monthly column for Rider magazine. Salvadori’s credits as a motojournalist since his first sale in 1975 include more than a thousand articles covering everything from travel to test rides. As a motorcycle adventure traveler, he has crossed six continents and more than 70 countries, passing the one million mile mark a long time ago.

In 2008, Whitehorse Press (Center Conway, NH) published 101 Road Tales, an anthology of Salvadori’s best columns, just under half of the total he produced in its first twenty years. “Road Tales” is still going strong in 2015, bringing the total number of columns to date to more than 300. It is presumed that the number of columns collected in the book and that Salvadori near the Pacific Coast Highway, or Highway 101, is purely coincidental.

In Salvadori’s first column, titled “Advocating Adventure” (8), he introduces himself and explains what he plans to talk about in “Road Tales.” He writes, “it will always deal with the manifold mysteries of motorcycling, especially touring” (8). Touring is indeed a subject to which the self-described “traveling man” (6) returns to again and again in such columns as “Magic Carpet” (35), “The Destination” (93), “Overcoming Inertia” (266). He even calls himself “The Travel Salesman” (209) in one eponymous essay and acknowledges with humor his travel mania may be a disease in “Chronic Travel Syndrome” (70). He also acknowledges that there are some moments when touring is not always wonderful in “The Hell of Travel” (359).

Salvadori explores other aspects of travel beyond touring itself. For him, touring is about experiences and memories. In “Hard Traveling” (78), he not only says the reason people tour is “to give ourselves memories”, but also “to give ourselves the very best stories to tell when we are in the company of others” (79). He revisits travel as memory in “When I Was a Young Man” (232) and “Travel Writing” (313). Salvadori discusses the more physical aspects of travel memories in “Souvenirs” (42), where he looks at postcards and other such items as madeleines or aides-mémoire for a trip taken. And he doesn’t forget to mention the resulting clutter in “Stuff We Don’t Need” (190).

Salvadori appreciates the local and the quirky whether he is traveling around the block or around the world. He calls for support of local dealers and suppliers of motorcycle parts in “A Good Wrench” (12); praises local restaurants as well as regional specialties in “The Food Factor” (216); and writes a paean to the wayside motel in “Sleepless on the Road” (240). He also prefers byways to highways, as he explains in “Nasty Roads” (28) and “For Love of Roads” (284).

As with many traveling men and women, Salvadori is fascinated by maps, whether in and of themselves, as in “Mapping It” (17) or “Basic Geography” (277) or in the context of contemporary technology, as in “MAP (Manually Activated Positioning) vs GPS (Global Positioning System)” (348). Packing and packing lists bedevil him in “Packing Problems” (166), “The List” (208), and “Packing Light” (281). Given his attitude toward GPS and his claim that he always forgets something when he packs, one wonders how he would fare with any of the packing apps available for smartphones.

He also covers other topics relating to motorcycling, though not necessarily related directly to travel. He comes out against mandatory helmet laws in “Fools’ Rules” (20) despite the number of lives such laws have saved (statistically). Laws, he feels, should protect people from others, not from themselves. He weighs in on the debate about “The Wave” (115). His big topic however might be called motorcycling etiquette. As Salvadori explains in “The Riding Ambassador” (96), “How Rude” (174), and “Banning Boorish Behavior” (262), motorcyclists are a minority group who have to be extra good to compensate for their negative reputations and perhaps change minds. Riders who object to being lectured to mind their manners will note that in “The Politically Incorrect Motorcyclist” (111), a biker lectures Salvadori for illegal (if understandable) passing in a traffic jam and so enhancing the negative reputation of motorcyclists everywhere.

Other “mysteries of motorcycling” Salvadori covers includes a tongue-in-cheek history of a bike from showroom to first owner, from first owner to subsequent owners, from last owner to being sold for parts (“A Motorcycle’s Life”). “Motorcycle Nerd” (31) and “If It Ain’t Broke” (170) are thin excuses to string together lots of entertaining bits of motorcycle trivia. But while it may be true that the average motorcycle runs on gas while the average motorcyclist runs on caffeine, “The Great Coffee Chase” (50) an entire column dedicated to just that, does seem to be pushing the redline.

No writer can produce a column month after month, year after year without recurring themes and returning topics. Nor can any writer maintain that pace over time without consciously or unconsciously resorting to a certain amount of tricks and techniques, if not formulaic writing. Such themes and topics, tricks and techniques may not be all that apparent when a column is read (or written) four or more weeks apart, but can become more obvious when read one right after another.

In the case of Salvadori the formulaic sequence is: hook; introduction; nut graph; a number of examples, usually an odd number, some personal, and at least one historical; a conclusion that circles back to something in either the introduction or the nut graph, forming a bracket; and finally a kicker. A variation of a structure beloved by high school English teachers everywhere, it allows him to “hammer out a thousand words with relative ease” (163).

“Thieving Scoundrels” (182) is a good example. A friend parks his motorcycle outside the Smithsonian. When he returns, he discovers the bike has been stolen. Salvadori makes a joke about booby-trapping the saddle with plastic explosives (he was a demolitions expert in Vietnam). He then goes on to tell a number of stories about motorcycles being stolen. He circles back to the opening anecdote by writing he’d like to visit the Smithsonian and reprises the bit about booby-trapping the saddle. The downside of that anti-theft plan provides the kicker.

The beginning of “Why We Love Motorcycles” (122) opens with Salvadori being asked why people love motorcycles at a dinner party. He ruminates on a number of personal, practical, and aesthetic reasons before saying who asked the question. The kicker follows. The bracket in “A Taste for Motorcycles” (145) starts with a chat with a motorcycle company publicist about what one of the new bikes looks like. Salvadori preferred the look of some older models. The middle reviews some aspects of motorcycle history. The kicker is what the publicist asks about the bike whose style Salvadori preferred. The brackets in “Cooking the Goose” (46) are two halves of a personal anecdote, broken at the “cliffhanger,” which also provides a suspense mechanism. “Heat, Cold, Wind, and Rain” includes anecdotes of each in turn of the “apocalyptic aspects of motorcycling” (244).

Interestingly, Salvadori provides the best solution to that problem when he warns that Road Tales “is not a read-all-at-once book. You should pick it up, read a column or two, [and] put it down” (7). Reading it any other way will highlight the tricks and repeats, and in an unfavorable light. That would be unfortunate. The columns are all entertaining and, while there are no think pieces here, a few are even informative. Who else would tell readers that a pseudo-Luddite who thinks he or she is superior or more interesting than anyone else because of a devotion to vintage vehicles over contemporary ones should be called a “mossback” (224)?

Jonathan Boorstein is a New York-based freelance journalist covering film, food, design, travel, and the arts as well as motorcycles and popular culture for The Rider’s Digest (theridersdigest.co.uk). He can be followed at www.facebook.com/jonathan.boorstein and @jonathan10003.